An Enduring Passion: The DOC at 100 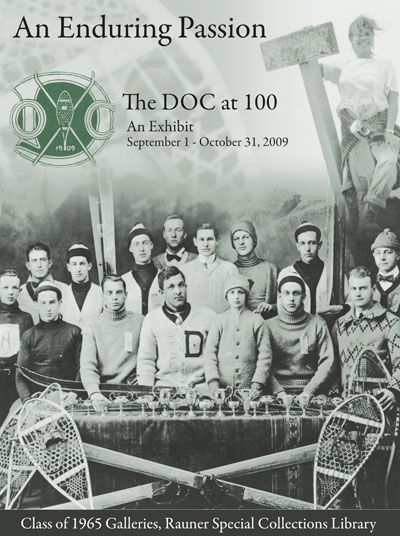 "I would insist that the man who spends four years in our North Country and does not learn to hear the melody of rustling leaves of does not learn to love the wash of racing brooks over their rocky beds in spring, who has not stood enthralled on the top of Moosilauke on a moonlit night or...has not thrilled at the whiteness of the snow-clad countryside in winter or at the flaming colors of fall -- I would insist that this man has not reached out for some of the most worthwhile educational values accessible to him at Dartmouth."

Selected highlights from the Outing Club's history, documenting the Club's founding in December 1909 as a winter sports organization, its ongoing enjoyment of the outdoors, and its stewardship of the natural world. Through Winter Carnival, First Year trips, affiliated clubs, and the miles of trails and numerous cabins it maintains, the DOC probably has touched the lives of more Dartmouth undergraduates than any other College organization.

The exhibition was curated by Barbara Krieger and Peter Carini and was on display in the Class of 1965 Galleries from September 1 to October 31, 2009.

Many of the materials in this exhibit are part of the DOC's manuscript collection (DO-1). A full finding aid is available online. If not otherwise noted, the item likely came from DO-1.

On December 7, 1909, The Dartmouth published the following letter from Fred Harris, Class of 1911.  His call for Dartmouth to involve itself in winter sports and to take full advantage of the opportunities that the College's "admirable situation" offered, resulted in an organization which has had a tremendous and lasting impact not only on the Dartmouth community, but on the sport of skiing, outdoor recreation, education and conservation, all firmly based on respect for the wilderness and with an enduring passion for the outdoors.

Now involving nearly all incoming first year students, the tradition of Freshmen Trips began in 1935 when the DOC organized a series of trips through the Moosilauke area specifically for first year students who had indicated that their decision to attend  Dartmouth had been greatly influenced by the existence of the  Outing Club. Trips were led by the DOC Directors during the week of September 8, and they hoped this group of students would talk up the Outing Club to their classmates.

In describing the advent of the Dartmouth Outing Club, the first such collegiate club, The Intercollegiate wrote in March of 1911, “Snowbound Dartmouth has long been accustomed to the ‘snow-shoer’ and the ‘skier,’ but never until the organization of this club has the attention of the college been focused so completely on winter sports.”  Indeed, the first carnival, dubbed a Winter Field Meet by it’s founder Fred Harris, 1911, was primarily focused on winter sports.  The first meet consisted of ski jumping, ski dashes and cross-country ski and snowshoe races.  The club was involved early on in hiking and camping, but its primary purpose revolved around Carnival and winter sports.  By the early 1930s the Winter Carnival had become an international event drawing competitors for Germany and Switzerland to compete in various skiing events.

In December 1969, George Kain, '70, Chairman of Cabin & Trail, informed the DOC Board that "the recently formed Environmental Studies group had voted to join the DOC as a third Council." Formal approval by the Board came on January 14, 1970.
The move represents a trend toward a new dimension in DOC activities -  education and social concerns are replacing the importance of mere recreation in the minds of some leaders of the organization,
The Dartmouth, January 15, 1970
The Mellon Foundation has funded many research projects undertaken by the Environmental Studies Division (DO-1, Series Series 26461, Environmental Studies Division of the DOC, 1968 - 1984, Box 6172 and 6173).