From the Destruction of Troy: Medieval Chronicles 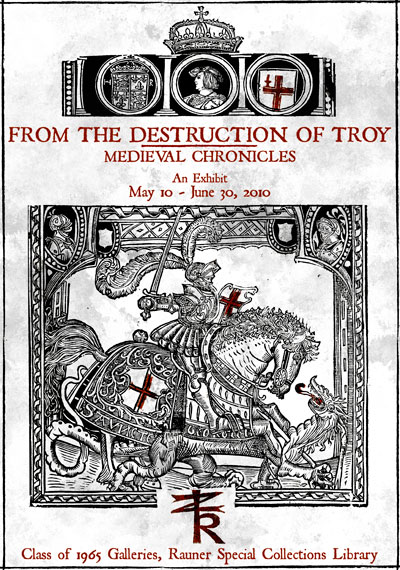 Based on oral tradition, documented historical events, biblical stories, and Greek and Roman myth, medieval chronicles became an important source for claims to power and fueled literary imagination. Harkening back to Virgil’s Aeneid, which set up Aeneas as the father of all Romans, they told of the mythical exploits of Aeneas’s progeny who fanned out over Europe after the fall of Troy. Rulers used chronicles to trace their ancestry to Aeneas and assert their kingdoms as the “New Rome,” and later writers like Spenser, Malory and Shakespeare retold the stories for new audiences.

The exhibition was curated by Jay Satterfield and was on display in the Class of 1965 Galleries from May 10 to June 30, 2010.

You may download a small, 8x10 version of the poster: Chronicles (2.1 MB) You may also download a handlist of the items in this exhibition: Destruction of Troy.

As forerunners to chronicles, local and regional annals tended to list yearly events in terse prose. Chronicles took on a broader scope and amplified events with episodic story telling. Though sections start and end abruptly, chronicles constructed grander narratives that established cultural and political cohesion. By tracing everything back to biblical creation or the fall of Troy, they posited a universal root culture for European and Mediterranean peoples. In these chronicles from France (Froissart), Germany (Rolevinck) and England (Higden), history begins with Genesis but each moves on to emphasize the region of its origin.

Great Britain produced a wealth of chronicles devoted to its own history. The Brut Chronicle was the most popular secular text in late medieval England. Originally written in the 13th century in Anglo-Norman, this Middle English manuscript from the 1450s carries the original chronicle up to 1419. It begins with tales surrounding Aeneas’s grandson, Brutus, who, cast out from Troy, conquered Albion and established the British royal succession. Like other chronicles, the Brut blends myth and historical evidence without distinguishing between the two: this manuscript includes the King Arthur legend alongside well-documented historical events.

This manuscript was recently digitized by the Dartmouth College Library and is available online for anyone to consult.

In the Early modern era, chronicles based on medieval examples flourished. These served as the source material for all manner of literary works. Shakespeare drew heavily from Holinshed’s Chronicles just as Spenser’s Faerie Queene looked back to medieval chronicles for inspiration. In literature, the episodic, disjointed narratives are fleshed out and new national myths created.