Bringing out the Leaves: Manuscripts and their Meaning 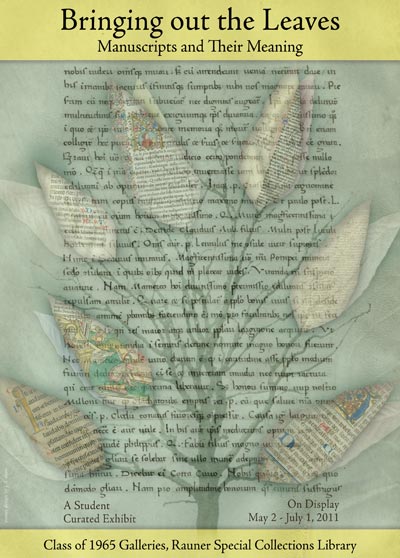 Dartmouth has a rich and diverse collection of medieval manuscripts that are used to support teaching and learning at the College. This exhibit represents the exploration of eight undergraduate students who share a fascination with the Middle Ages. The brought their own interests to the materials, sometimes selecting the same items for quite different purposes. The ensuing negotiation illustrated well how meaning depends greatly on point of view and context. We invite you to carry on the exploration by seeking you own connections among these intriguing materials!

You may download a small, 8x10 version of the poster: BringingOutTheLeaves.jpg (2.1 MB) You may also download a handlist of the items in this exhibition: Bringing out the Leaves.

Case 1. In the Margins

Marginal art and writing, whether intended by the ones who designed the text or added later by industrious readers, both complements and reinterprets the text. The practice of marginal argument, called “disputatio,” was commonplace in both religious and secular works. Guilelmus Peraldus' manuscript contains a reader’s careful annotations, while Marcus Junianus Justinus' manuscript demonstrates how succeeding readers combed through the text, marking passages for themselves and future readers.

Just as written comments could add meaning to a text, so too could painted images. In 14th- and 15th-century prayer books, for example, floral motifs developed high levels of realism. Whether drawn from the Classical tradition or from native European species, such as daisies and roses, flower designs enhanced the manuscript’s visual allure. They could encourage spiritual contemplation, but they could also distract the reader from the text’s main message.

Handwriting expresses both individual and cultural identity. In the ninth century, scribes at Charlemagne’s imperial court developed a very clear script, closely related to the forms we use today. “Carolingian miniscule” is highly readable because it has few ligatures (conjoined letters) or abbreviations. Centuries later at the beginning of the Renaissance, humanist scholars read Carolingian books and believed that they had rediscovered original Roman texts. In hopes emulating the great Roman writer Cicero, they reworked Carolingian miniscule into Italian Humanist script.  The adoption of humanist script became, across Europe, a political statement about the embrace of Classical ideals.

Although traditionally considered revolutionary, print technology in its early years was modest and retrospective. In fact, fifteenth-century printers sought to establish their legitimacy by mimicking manuscripts. These two works exemplify this process. They have many similarities even though one is an Italian manuscript on vellum and the other a German print on paper: both vary between bold, large characters and thin, small characters; both use gothic script (an older letter form) and a combination of blue and red for decorated initials. At a glance, the printed book and the manuscript book are difficult to tell apart.

These two books show the close relationship between manuscripts and printed books. Jacobus Rubeus prepared two editions of the same text, one printed on paper and one on vellum. He then sent the vellum version to illuminators, where it was decorated as a manuscript, including marginal foliage.  Marginal notes were also added in a humanist script. The paper copy of the same page also has room for decorations, although they were not completed.  The hybrid form of printed text with hand illustrations, and the use of vellum, remind us that print technology was initially considered an extension of manuscript culture.

Women and girls played important roles as readers and producers of religious texts. Books of Hours were used by many lay worshippers, but this tiny one seems specifically designed for young aristocratic girl to learn her prayers (it has few abbreviations, for example). Saint Catherine of Siena (1347-80) took childhood learning to remarkable lengths, teaching herself to read and encountering God when she was only six years old. While she did not write about establishing a new role for women within the church, the emancipated life she led made her a model of female intellectual and spiritual capabilities.

Secular documents also played important roles in the lives of women and girls. In the letter from Elizabeth Carew to her father Nicholas (a renowned member of the British royal court), she describes a dress she would like made for her. In the property settlement issued by Gonzalo de Ocampo, a Spaniard in Peru, he gives several houses to his illegitimate daughter, Maria, in an effort to stabilize her precarious social position. Both documents highlight cultural deference to a father’s authority as well as the power of the written word to intervene on a woman’s behalf.