“Illness is the night side of life,” writes Susan Sontag, “A more onerous citizenship. Sooner or later, each of us is obliged … to identify ourselves as citizens of the kingdom of the sick.” But what does it mean to be ill? How do individuals, families, communities, and health care practitioners navigate passages between wellness and illness? How does access to medicines and other therapies – be they “traditional” or “modern” – shape these decisions? What does socioeconomic inequality have to do with this? And what do we do when medicine can’t save our lives?

These student-curated exhibits speak to these questions. Explorations into good lives and good deaths; plants, people and medicines; and illness narratives as inflected by race in America, the work in these displays emerged from ANTH 7.02 The Values of Medicine. This First-Year Seminar taught by Prof. Sienna Craig is dedicated to exploring such questions through in-depth engagement with Rauner Special Collections. 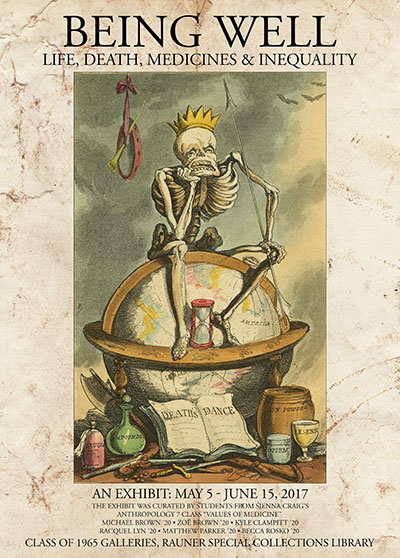 You may download a small, 8x10 version of the poster: BeingWell.jpg. You may also download a handlist of the items in this exhibition: BeingWell1.pdf.

Through a selection of 19th century European texts and illustrations, this exhibit explores the psychosocial shift in the image of death and its representation in popular culture. During the 19th century, death was much more a part of everyday life than it is now, due to poor living conditions and limited medical practices. The fact that it was a common occurrence gave rise to a wealth of death-based humor and satire in literature. By the 20th and 21st centuries, as basic public health standards increased and mortality rates decreased, the topic of death became more socially taboo. The 19th-century books used in this exhibit demonstrate satire through a lighthearted representation of skeletal cartoons. By the 21st century, as revealed in the artist book used in this exhibit, we see a a struggle to accept the inevitability of death or death framed as failure.

The reality of death also prompts reflection on what it means to live a good life. The second part of this exhibit explores this question: What does it mean to live a good life? A handbook offers advice to young gentlemen. The Dance of Life, an epic poem about living, illustrate social ideals about how individuals should conduct themselves in order to achieve a ‘sounder life.’ Throughout the 19th century, living a good life was often defined in terms of having a high moral standard and a good character, as well as adhering to religious practice, which at many times went hand in hand. But what happened if these codes of moral conduct went unheeded? This poses another question: Does living a ‘good life’ justify and lead to a ‘good death’?

Case 2. The Color of Medicine: Race in Patient Narratives. By Michael Brown and Racquel Lyn

In November 2015, a study published in the Journal of the American Medical Association reported that African American children were 80% less likely than white children to be prescribed analgesics when presenting identical symptoms of appendicitis. This medical “fact” helps to quantify a deep-seated racial bias that can be present in the practice of medicine, and that has impacted the ways black patients tell their stories of suffering. Throughout U. S. history, racism and social stigmas have distorted the patient narratives of people of color. In this exhibit, we bring to light rare personal accounts from black patients during the era of slavery and Jim Crow. These stories exemplify the cultural mistrust that can exist between doctor and patient across divides of race and ethnicity – divides that clearly persist to this day.

This exhibit explores the complex reality of how patient narratives are impacted by race and ethnicity in a historical context. The translucent vellum paper that covers some items in the display serves as a metaphor for the many layers of racism and ignorance that one must look past when attempting to bear witness to the realities of history. However, if one looks closely and carefully enough, if one looks beneath the surface, it is possible to see a deeper or different truth. This truth is representative of the choice one makes each day, to either accept a one-dimensional view of medicine or to delve beneath the surface and gain a better understanding of the historical contexts and lived realities of underprivileged patients. This exhibit reveals some of the less known experiences of African Americans in relation to contemporary medicine, and helps the viewer understand the legacy of race and health inequality, amongst other issues, in black communities.

Case 3. From Authoritative to Alternative: Plants and Food as Medicine. By Zoë Brown and Matthew Parker

For centuries, people have made use of home remedies and methods of healing that rely on plants and food as medicine. Almanacs, advertisements, journals, and other written texts have, throughout history, documented the ways people have sourced medicine from the natural environment. Yet at the dawn of “modern” medicine, just how prevalent was the use of botanical remedies? Was food viewed as a source of medicinal value? How did concepts of nutrition contribute to the practice of medicine? How did these plant and food forms of medicine alter or influence society’s ability to heal itself, particularly as the authority of the biomedical doctor increased? This exhibit explores the history of plants and food as medicine and their transition from a widely-accepted form of medicine to a healing “alternative,” as they are known today.

This exhibit tells this story in three parts. The first section examines foods and plants that were widely supported by medical professionals from the 15th - 17th centuries, but depicted in a non-scientific, almost mythological manner. The second section focuses on an overlapping period of history (16th – 19th centuries) in which botanical and nutritional healing modalities gained medical authority through the endorsement of accredited physicians. The third section illustrates the transition of this healing modality from an accepted and legitimized tradition to an “alternative” practice from the 17th century to the present. Using a variety of sources including illustrated and artistic works, field guides, and herbals, this exhibit takes viewers through this transformation, shedding light on the intersection of authoritative medical knowledge and traditions of plant and food-based healing.