By the eighteenth-century, print had become an important medium for linking disparate parts of empires, distributing revolutionary ideas, and fostering intellectual debate. This exhibition, held in conjunction with the meeting of the Northeast American Society for Eighteenth-Century Studies, examines some of the threads of the transatlantic conversation carried out in print

Like any good eighteenth-century book of poetry, we offer materials written "on several occasions" to try to better understand the complex social and literary world of the time. Starting with Dartmouth’s provincial history, the materials reach into the literary world of Boston and London and show different encounters Europeans had with America through books.  The connection of one of Dartmouth founding leaders, Samson Occom, with the slave poet Phyllis Wheatley and her owners, and her linkage to the Earl of Dartmouth (shown here by his presentation copy of Pope’s translation of Homer) show a surprising social network tying together a diverse group of people.  They contrast with romantic and often fanciful visions of America and the divergent literary scene in London to show multiple narratives making up the transatlantic conversation.

You may download a small, 8x10 version of the poster: AtlanticDestinies.jpg (2.9 MB) You may also download a handlist of the items in this exhibition: Atlantic Exchange. 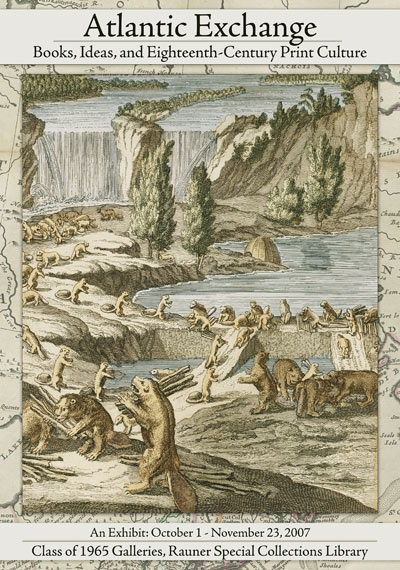