Animal Magnetism: The Enduring Allure of the Bestiary

A runaway best seller in the Middle Ages, bestiaries catalogued and described animals (including the well-known siren, unicorn, and leontophone) and turned them into metaphors of religious doctrine and belief. Over the centuries, the idea of the bestiary has proven itself to be as riveting as the gaze of a cat. The emblem book, 17th century natural histories, and children's literature all owe a debt to this enduring literary form.

See for yourself why a good animal story and great art always fascinates readers.

The exhibition was curated by Elizabeth Kirk, Associate Librarian for Information Resources, and was on display in the Class of 1965 Galleries from January 6 to February 28, 2010. 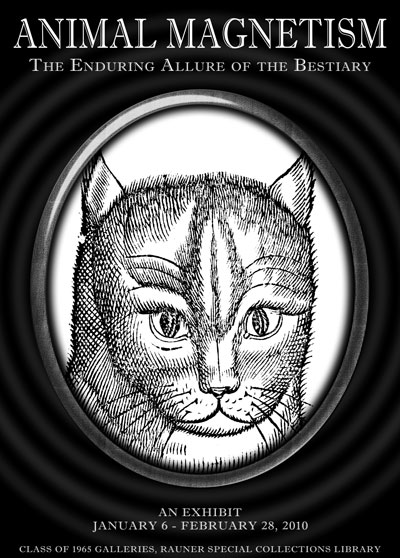 Case 1. A Star is Born: How the Unicorn Entered the Christian Imagination

The unicorn is found in Mesopotamian, ancient Asian, and classical texts, so it was not unfamiliar to ancient readers. How it entered the medieval Christian imagination is, however, an interesting moment in the history of translation.

In the 3rd century BCE, a group of wealthy Jews living in Alexandria, Egypt funded a translation of the Hebrew Tanakh, or entire Old Testament, into Greek, the most widely spoken and read language of the day. The resulting translation, called the Septuagint (“The Seventy”, for the number of scholars traditionally thought to have prepared the text), is a landmark translation of the Hebrew Bible and a basis for later Christian translations. It is, however, not without its oddities. In the Hebrew text from which it was prepared, Psalm 22:22 mentions an animal called a re’em, or wild ox (“Deliver me from a lion’s mouth; from the horns of wild oxen rescue me.”) The Septuagint translator, unfamiliar with the Hebrew name, rendered it into Greek as monokerós, or unicorn (“Save me from the lion’s mouth; and regard my lowliness from the horns of the unicorns.”) Early Christian writers, including Origen and the author of the Physiologus, assumed the translation to be accurate and added the unicorn to their pantheon of beasts. Physiologus manuscripts in many variants fanned out across Europe over the next several hundred years. The unicorn had clearly arrived. Today’s Jewish and Christian Bibles have returned to the earlier Hebrew “wild ox”.

Case 2. Physiologus, or The Interpreter of Nature

The Physiologus is the source of medieval Western European bestiaries. It was widely translated and freely adapted, and all later bestiaries spring from it (the very name bestiary derives from the index title in the Latin translation of the Physiologus). These works, in their many variations, became the most widely read and owned texts in western Europe after the Psalter and the Apocalypse.

The Physiologus, whose title describes its anonymous author, “The Naturalist” or “The Interpreter of Nature”, reworks legends springing from Egyptian, Greek, and Latin sources that were common currency in the ancient world. The earliest versions of the Physiologus appear to date from the 3rd century CE. While the legends concerning the animals, plants, and stones found in the Physiologus are not original, what is original is the way in which the author uses these to explain Christian morality and doctrine. The stuff of nature offers the faithful a glimpse of God’s nature and how he interacts with his creation. The natural world corresponds to the divine realm: learning how the natural world works thus leads to an understanding of the work of God. To study the panther therefore is to come to a revelation of the resurrection of Christ. So said Origen, 3rd century Church Father and neo-Platonist, whose theology is clearly reflected in the Physiologus:

Thus it is possible for us to mount up from things below to things above, and to perceive and understand from the things we see on earth the things that belong to heaven. [Origen. The Song of Songs: Commentary and Homilies. translated and annotated by R.P. Lawson. New York: Newman Press, 1956, p. 218.]