In 1933, Dartmouth College was invited to become one of seventeen college libraries to participate in a philanthropic plan initiated by a wealthy bibliophile named Tracy McGregor. Dartmouth's Library, under the direction of Nathanial Goodrich, was in the process of growing into a true research library. One major aspect lacking in its collections was a strong rare book collection. This exhibit illustrates how Dartmouth's participation in the McGregor Plan laid the groundwork for the Library's rare book collections and their integration into the curriculum.

The exhibit was curated by Josh Lascell and Peter Carini and was on display in the Class of 1965 Galleries from July 10 to August 31, 2009. 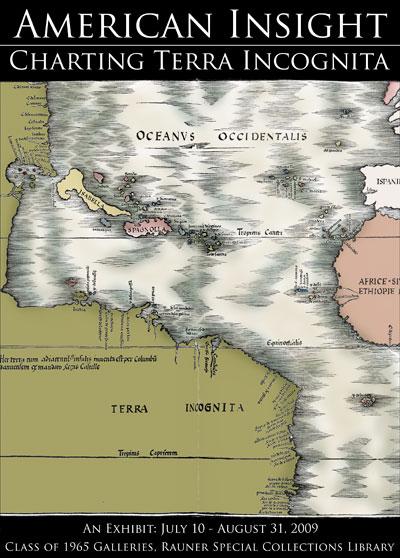 In 1933, Dartmouth College Professor of History Frank Malloy Anderson received a letter from J. Franklin Jameson, the chief of the Manuscripts Division at the Library of Congress. Jameson invited Dartmouth to become part of a philanthropic plan then being organized by a wealthy bibliophile name Tracy McGregor and operated under the auspices of the American Historical Association.  Dartmouth participation in the McGregor Plan would have an effect on generations of students and faculty studying and teaching American history and bibliography at Dartmouth.

The American Historical Association Committee on Americana for College Libraries ran the program known as the “The McGregor Plan for the Encouragement of Book Collecting by American College Libraries” after its namesake, Tracy W. McGregor.  "The Plan" would eventually add about 200 rare Americana books to Special Collections at Dartmouth. Among the books were Ptolemy's “Geographie” (1513); Smith’s “General History of Virginia” (1624) and  Las Casas' devastating depiction of natives at the hand of Conquistadors in a “Brief Account on the Destruction of the Indies...” (1578).  These titles are  among the rarest and most valuable Americana holdings in Rauner and have offered continuing support to Dartmouth’s humanities curriculum for decades.

Dartmouth joined 16 other colleges and universities to benefit from the plan, which stipulated that the McGregor Fund (Tracy McGregor's philanthropic organization) would make an annual gift to participating colleges of $500, matching the same amount contributed by the college for a total of $1,000 per year (roughly $16,500 adjusted for inflation in 2008).  The money could be used only to buy rare books related to the study of early American history that were produced contemporaneously with the events that they chronicled.

During the first years of the Plan, titles were selected and held by McGregor himself in consultation with librarians, antiquarian booksellers and historians and were to represent what a good Americana library ought to hold.  The Plan would then issue catalogues listing books available to be purchased by colleges under the program.  McGregor, who had recently built up his own rare Americana library, was well-versed in the auctions, catalogues and nomenclature of antiquarian booksellers.  He wanted to use this expertise to relieve librarians, who may not have had specialized knowledge of the rare book trade and Americana, of the burdens of navigating the rare book market.  After most of the libraries had formed the nucleus of their Americana holdings, the Plan allowed individual libraries to purchase directly from book dealers using Plan funds for assistance.

The Plan ran through the height of the Great Depression offering colleges the opportunity to expand their holdings despite the economic pressures they faced.   Even with the assistance  offered by the Plan, two of the approved colleges (Mills and Lafayette) were not able to complete the planned 10 year cycle due to economic pressures.  Dartmouth was able to participate in every year the Plan was available.

Driving down the cost of some titles was their condition.  A number of books that were offered by the Plan were missing plates or illustrations, reducing their cost in a book market obsessed with condition and original states.  In such cases, usable facsimiles were tipped in.  In other instances, pages of text were missing or damaged and paper repair to the volume was undertaken.  Dartmouth holds examples of both instances in its McGregor holdings.   These altered titles allowed colleges engaged in the Plan an opportunity to obtain books that might otherwise have been financially impossible to acquire.  As both McGregor wished and Dartmouth librarians demanded, the books were destined to be part of an active curriculum, not retained as museum pieces.

McGregor envisioned the Plan to last ten years and to include colleges neither near major urban research libraries nor in book rich New England.  How Dartmouth came to be invited is unknown – Hanover then being within easy rail reach of the libraries at Harvard, Yale, Worcester (American Antiquarian Society Library), and Brown (the John Carter Brown Library).  Randolph Adams, head of the Clements Library at the University of Michigan, and later administrator of the Plan, was a “friend” of Dartmouth president Ernest M. Hopkins, but no evidence in the correspondence held by Dartmouth has been found to support this connection yielding the invitation.

Although the Plan lasted only nine years, running through the height of the Great Depression, offered Dartmouth the opportunity to expand its nascent rare book holdings despite the economic pressures of the time. The Plan was structured to make an annual gift to the 17 participating colleges of $500, matching the same amount contributed by the college for a total of $1,000 per year.  The money could be used only to buy rare books related to the study of early American history.  The plan ended as a result of shifting priorities related to World War II.

The items in this case document the implementation of the McGregor Plan at Dartmouth.

Institutions that participated in the McGregor Plan:

Frank Maloy Anderson joined the Dartmouth history faculty in 1914 after teaching for 19 years at the University of Minnesota, his Alma Mater. A well respected authority on modern Europe, France and World War I Anderson accompanied President Woodrow Wilson to Versailles as a member of the American Commission to Negotiate Peace after World War I.  Among Anderson’s published works were a Handbook of the Diplomatic History of Europe, Asia, and Africa, 1870-1914 (1919) and The Public Man (1948). The later being a huge popular success. Anderson’s solid reputation amongst academic historians and his role as a member of the American Historical Association made him a likely contact for the Association’s McGregor Plan at Dartmouth. Frank Maloy Anderson retired from Dartmouth in 1941 after 27 years on faculty. He died at the age of 90 in 1961.

Nathanial Goodrich came to Dartmouth as the College’s 13th Librarian in 1912.  At the time the Library was housed in Wilson Hall, a woefully inadequate building.  During Goodrich’s tenure the College received several large gifts that allowed Baker Library to be built, and paid for the development of the collection.  Following the move to Baker in 1928, Goodrich set about the task of building a modern library for Dartmouth.  Among his many accomplishments in this endeavor was the establishment of the College Archives and the development, beginning in 1938 of a rare book collection.  The McGregor Collection, would have been an early addition to this new branch of collecting for Dartmouth. For his professional work, Goodrich was awarded an honorary Doctorate from his Alma Mater, Amherst College, in 1941.  Goodrich retired from Dartmouth College in 1950 and died at the age of 77 in 1957.

The McGregor Collection at Dartmouth College covers the history of the Americas from 1513 to 1894.  Within this broad historic swath, we can identify six major themes: Discovery and Exploration of the New World; Settlement of the Americas; Colonial Continental Exploration and Travel; Relations with Great Britain and the Revolution; Exploration of the West; and Westward Expansion. The books in this case represent examples of these six themes.  Interesting gaps in the McGregor collection include the French and Indian Wars and the American Civil War.  It is not clear why these areas were neglected, though it may have been that the Library already had strong collections in these areas or that neither area was extensively covered in the curriculum at the time.