In the nineteenth century, American writers began to distance themselves from the influence of England to create a truly American literary identity. One attempt was literary realism, a philosophy that tried to represent contemporary society as it truly was. In the journalistic sphere, this experiment grew largely through the efforts of newspapermen Ambrose Bierce and Mark Twain in the 1870s and 1880s. It reached full bloom under the cynical editorial reign of H. L. Mencken in the early 1900s.

Undergirding the writings of these three men was a fervent desire to puncture the myth of culture and to expose stupidity, vanity, and corruption through scorn and ridicule. All three, in their way, belonged to what one critic has termed “the cantankerous school” of American writing, an institution that offers master classes in sardonic satire, acidic invective, and merciless truth.

The exhibit was curated by Morgan Swan and was on display in the Class of 1965 Galleries from January 7 to February 28, 2013. 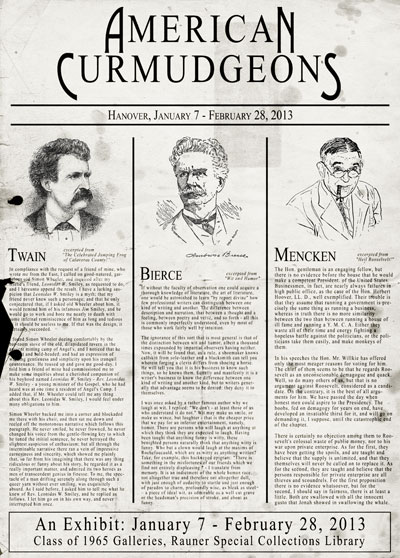 Ambrose Bierce (1841-1913?) was an American journalist, satirist, and contemporary of Mark Twain. Often called "Bitter" Bierce, he is best known for his much-anthologized short story "An Occurrence at Owl Creek Bridge" and his satiric book of definitions known as The Devil's Dictionary. However, he is still a relatively unknown luminary within the American literary constellation. One reason may be that Bierce did not consider himself a humorist, but instead was a master of wit, which he believed was a more sophisticated if less lucrative pursuit: “Wit may make us smile, or make us wince, but laughter—that is the cheaper price that we pay for an inferior entertainment, namely, humor.” Bierce’s disappearance in 1913, while following the exploits of Pancho Villa’s army in Mexico, is a mystery that has never been solved. One writer, several years after Bierce’s disappearance, adroitly encapsulated Bierce’s impact upon American literature by claiming that all people “may be divided into two classes; those who have never heard of Ambrose Bierce, and those who consider him the greatest short-story writer that America has produced since Edgar Allan Poe.”

Samuel Langhorne Clemens (1835-1910), known more familiarly as Mark Twain, was the greatest American humorist of his day and one of the most gifted writers that the United States has ever produced. Renowned for his barbed witticisms about American culture and human nature, he is arguably most famous for his controversial novel The Adventures of Huckleberry Finn. Clemens was born in 1835 in Hannibal, Missouri, and progressed through a number of stalled careers. He settled upon journalism after writing some successful newspaper sketches such as “The Celebrated Jumping Frog of Calaveras County.” By the time of his death in 1910, Mark Twain had become a national icon whose cult of personality had grown beyond his literary achievements. As one admirer said upon hearing of Twain’s passing, “His death is a National loss, but we have the consolation that he and his genius belonged to and were of us.”

H. L. Mencken (1880-1956) was a journalist, magazine editor, book critic, and caustic wit. Born in Baltimore, he came to national prominence as a vitriolic editorialist for the Baltimore Sun, to which he contributed regularly for over forty years. As editor of The Smart Set and The American Mercury, Mencken was one of the most influential voices in America. An impressive if amateur linguistic scholar, he published significant treatises on the English language. He was a friend to Ambrose Bierce and a lifelong devotee of Mark Twain, the latter of whom had an early and enduring impact upon Mencken’s approach to literature. Still, despite his admiration for Twain’s humor and his resultant deftness within that particular genre, Mencken’s own rhetorical inclination drifted more towards immediate and deadly stabs of cynical wit than the drawn-out elaborations that characterized Twain’s satire. He was, in his own words, “a gay fellow who heaves dead cats into sanctuaries and then goes roistering down the highways of the world.”