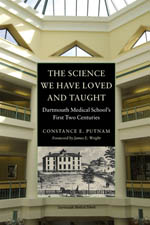 The Science We Have Loved and Taught: Dartmouth Medical School’s First Two Centuries

Dartmouth Medical School (DMS), the fourth oldest medical school in the United States, was founded in 1797 in Hanover, New Hampshire, by Nathan Smith. An entrepreneurial doctor with his own special brand of patient-centered medical care, Smith saw the fledgling Dartmouth College as a "literary institution" that would give status to his medical school and enhance his efforts to train physicians to care for rural patients. The College and the Medical School have followed intertwined paths ever since, as Constance Putnam shows in her account of the School's first two centuries. Like all medical schools, DMS has had to learn how to get along with its parent institution. At Dartmouth, this has meant repeatedly sorting out just how independent the "Medical Department" (as it was initially known) should be of Dartmouth College itself. Yet it is the strong personalities and the unique way Dartmouth responded to changes in fashion for medical education that sets the DMS story apart. Putnam brings to life the men who helped make Dartmouth Medical School important in the history of medical education. The unique path followed by Dartmouth Medical School in the aftermath of the Flexner Report is also thoroughly explored. The book concludes with an assessment of DMS at the end of its second century and a look at the way Nathan Smith's early vision had grown to something far greater and more useful to the health of that rural population he sought to serve than even he could have imagined.

CONSTANCE PUTNAM is a writer who specializes in the history of medicine and medical ethics. She is co-author of Improve, Perfect, and Perpetuate: Dr. Nathan Smith and Early American Medical Education (UPNE 1998). In 1999 she received a Ph.D. from Tufts University in its interdisciplinary doctoral program.

This electronic publication of The Science We Have Loved and Taught was made possible with the permission of the author. The University Press of New England created EPUB, MOBI, and PDF files from a scanned copy of the book.

Published with permission of Constance Putnam.