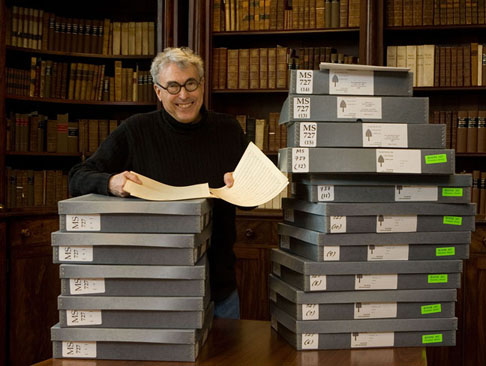 Jon Howard Appleton (1939-) is a composer of both instrumental and electro-acoustic music and co-developer of the Synclavier. He has been on the Dartmouth College Music Department faculty since 1967. He has previously taught in Sweden, at the Moscow Conservatory of Music, the Massachusetts Institute of Technology, and at Keio University in Tokyo, Japan. In 2003 he was awarded the "Lifetime Achievement Award" by the Society for Electro-Acoustic Music in the United States. He has been the recipient of Guggenheim, Fulbright, National Endowment for the Arts, National Endowment for the Humanities, and American-Scandinavian Foundation fellowships.

For more information see the composer's homepage, including lists of publications and recordings, an autobiography, and photographs, and the Guide to the Papers of Jon Appleton, 1931-2009.

Patricia Fisken, Head of Paddock Music Library, proposed this project and has shepherded it through its planning and production stages. She has worked closely with Jon Appleton as he transfers his Papers to the Rauner Special Collections Library: https://ead.dartmouth.edu/html/ms727.html. The Papers of Jon H. Appleton contains correspondence, publicity materials, newspaper and magazine articles, photographs, floppy discs, programs, reviews, recordings, and musical scores. They document Appleton's career as a composer, primarily in the field of electronic music, and his time as a professor at Dartmouth. Peter Carini, College Archivist, worked with Jon Appleton to secure the rights to deliver these music files freely online.

During summer 2008, David Bowden, Music Library Specialist at Paddock Music Library, created master audio files from a variety of media using the equipment and expertise of Dartmouth's Jones Media Center. These were converted to MP3 files for delivery online by the Library's new Digital Production department, a website was built, and a spreadsheet was delivered to the Cataloging and Metadata Department in order to facilitate the creation of new MARC records in the Library's catalog and in OCLC's WorldCat database. The Digital Production department also delivered copies of the master file to the Database of Recorded American Music (DRAM), a not-for-profit resource providing online access to CD-quality audio of 2,300 albums worth of recordings from independent record labels and sound archives: http://www.dramonline.org. The copies of these Jon Appleton compositions in DRAM are available to the many educational institutions that subscribe to DRAM; the copies of the Appleton files on the Dartmouth College server are free to all for non-commercial use.

We are very grateful to Jon Appleton for giving his permission for these compositions to be made freely available for non-commercial use.