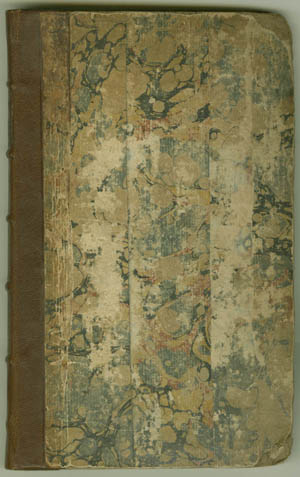 BEING
An approved Collection of Correct MAPS,
BOTH GENERAL AND PARTICULAR,
0F
THE BRITISH COLONIES;
Especially those which now are, or probably may be
THE THEATRE OF WAR :
Taken principally from the actual Surveys and judicious Observations of Engineers DE BRAHM and ROMANS; COOK, JACKSON, and COLLET; Maj. HOLLAND, and other Officers,
EMPLOYED IN
HIS MAJESTY'S FLEETS AND ARMIES.

LONDON: Printed for R. SAYER and J. BENNET, Map and Print-Sellers,
(No. 53) Fleet-street. 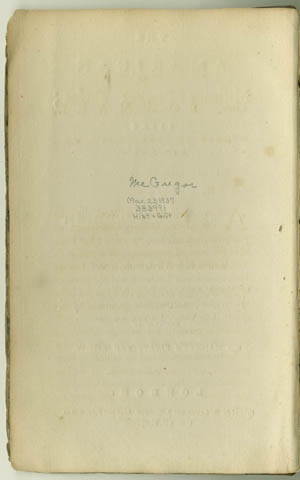 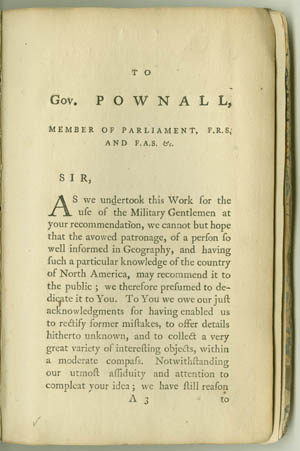 AS we undertook this Work for the
use of the Military Gentlemen at
your recommendation, we cannot but hope
that the avowed patronage, of a person so
well informed in Geography, and having
such a particular knowledge of the country
of North America, may recommend it to
the public; we therefore presumed to dedicate
it to You. To You we owe our just
acknowledgments for having enabled us
to rectify former mistakes, to offer details
hitherto unknown, and to collect a very
great variety of interesting objects, within
a moderate compass. Notwithstanding
our utmost assiduity and attention to
compleat your idea; we have still reason 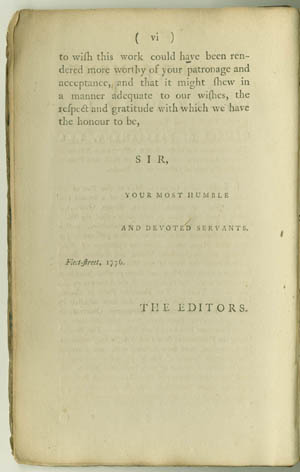 to wish this work could have been rendered
more worthy of your patronage and
acceptance, and that it might shew in
a manner adequate to our whiles, the
respect and gratitude with which we have
the honour to be, SIR,
YOUR MOST HUMBLE 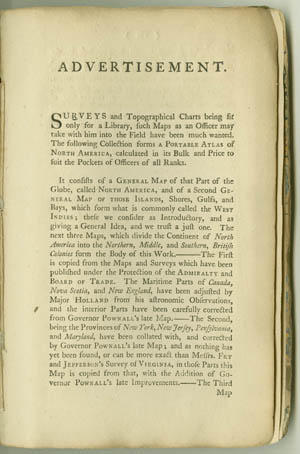 SURVEYS and Topographical Charts being fit
only for a Library, such Maps as an Officer may
take with him into the Field have been much wanted.
The following Collection forms A PORTABLE ATLAS of
NORTH AMERICA, calculated in its Bulk and Price to
suit the Pockets of Officers of all Ranks.

It consists of a GENERAL MAP of that Part of the
Globe, called NORTH AMERICA, and of a Second GENERAL
MAP OF THOSE ISLANDS, Shores, Gulfs, and
Bays, which form what is commonly called the WEST
INDIES; these we consider as Introductory, and as
giving a General Idea, and we trust a just one. The
next three Maps, which divide the Continent of North
America into the Northern, Middle, and Southern, British
Colonies form the Body of this Work. ——The First
is copied from the Maps and Surveys which have been
published under the Protection of the ADMIRALTY and
BOARD OF TRADE. The Maritime Parts of Canada,
Nova Scotia, and New England, have been adjusted by
Major HOLLAND from his astronomic Observations,
and the interior Parts have been carefully corrected
from Governor POWNALL'S late Map.—— The Second,
being the Provinces of New York, New Jersey, Pensylvania,
and Maryland, have been collated with, and corrected
by Governor POWNALL'S late Map; and as nothing has
yet been found, or can be more exact than Messrs. FRY
and JEFFERSON'S Survey of VIRGINIA, in those Parts this
Map is copied from that, with the Addition of Governor
POWNALL'S late Improvements.—— The Third 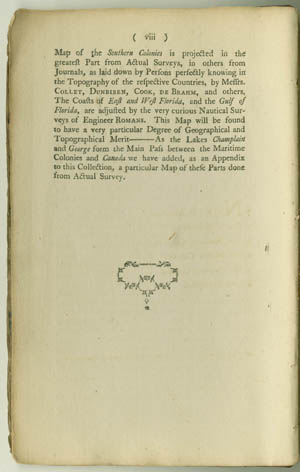 Map of the Southern Colonies is projected in the
greatest Part from Actual Surveys, in others from
Journals, as laid down by Persons perfectly knowing in
the Topography of the respective Countries, by Messrs.
COLLET, DUNBIBEN, COOK, DE BRAHM, and others.
The Coasts of East and West Florida, and the Gulf of
Florida, are adjusted by the very curious Nautical Surveys
of Engineer ROMANS. This Map will be found
to have a very particular Degree of Geographical and
Topographical Merit —— As the Lakes Champlain
and George form the Main Pass between the Maritime
Colonies and Canada we have added, as an Appendix
to this Collection, a particular Map of these Parts done
from Actual Survey. 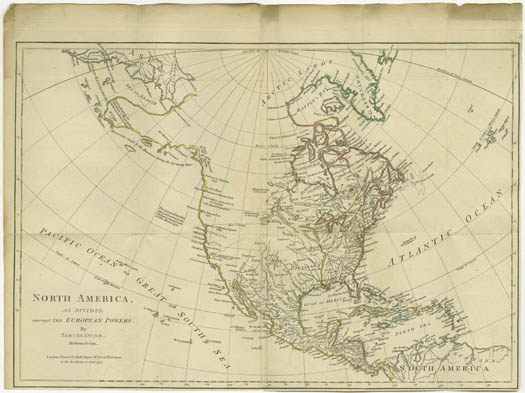 North America, as divided amongst the European Powers. 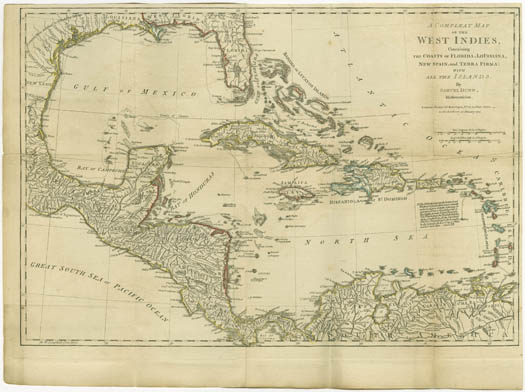 A Compleat Map of the West Indies, containing the Coasts of Florida, Louisiana, New Spain, and Terra Firma: with all the Islands.

By Samuel Dunn, Mathematician. London: Printed for Robt. Sayer, No. 53 in Fleet Street, as the Act directs, 10 January 1774. 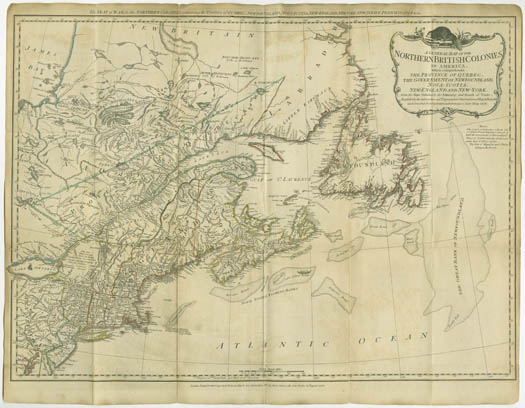 A General Map of the Northern British Colonies in America. which comprehends the Province of Quebec, the government of Newfoundland, Nova-Scotia, New-England and New-York.

from the Maps Published by the Admiralty and Board of Trade, Regulated by the Astronomic and Trigonometric Observations of Major Holland, and corrected from Governor Pownall's Late Map 1776. 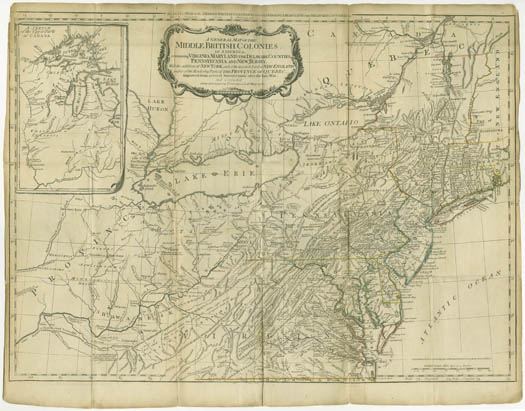 A General Map of the Middle British Colonies, in America. containing Virginia, Maryland, the Delaware Counties, Pennsylvania and New Jersey.

With the addition of New York, and of the Greatest Part of New England, as also of the Bordering Parts of the Province of Quebec, improved from several Surveys made after the late War, and Corrected from Governor Pownall's Late Map 1776. 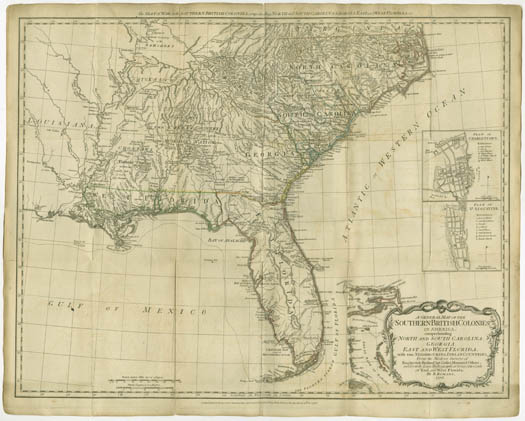 A General Map of the Southern British Colonies, in America. comprehending North and South Carolina, Georgia, East and West Florida, with the Neighbouring Indian Countries.

From the Modern Surveys of Engineer de Brahm, Capt. Collet, Mouzon & Others; and from the Large Hydrographical Survey of the Coasts of East and West Florida. By B. Romans, 1776. 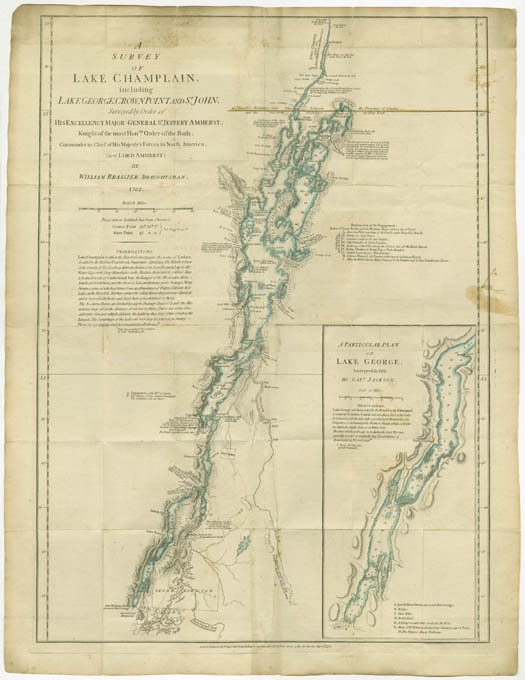 A Survey of Lake Champlain, including Lake George, Crown Point and St. John.

Surveyed by Order of His Excellency Major General Sr. Jeffery Amherst, Knight of the most Honble. Order of the Bath, Commander in Chief of His Majesty's Forces in North America, (now Lord Amherst) by William Brassier, Draughtsman. 1762. 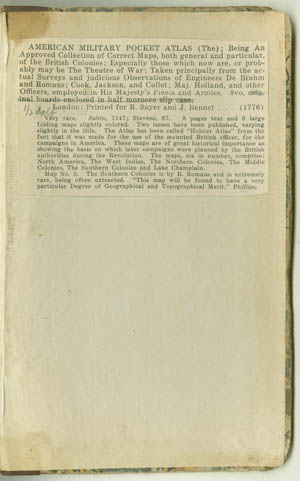 AMERICAN MILITARY POCKET ATLAS (The) ; Being An
Approved Collection of Correct Maps, both general and particular,
of the British Colonies; Especially those which now are, or probably
may be The Theatre of War: Taken principally from the actual
Surveys and judicious Observations of Engineers De Brahm
and Romans; Cook, Jackson, and Collet; Maj. Holland, and other
Officers, employed in His Majesty's Fleets and Armies. 8vo, original
boards enclosed in half morocco slip case.

Very rare. Sabin, 1147; Stevens, 87. 8 pages text and 6 large
folding maps slightly colored. Two issues have been published, varying
slightly in the title. The Atlas has been called "Holster Atlas" from the
fact that it was made for the use of the mounted British officer, for the
campaigns in America. These maps are of great historical importance as
showing the basis on which later campaigns were planned by the British
authorities during the Revolution. The maps, six in number, comprise:
North America, The West Indies, The Northern Colonies, The Middle
Colonies, The Southern Colonies and Lake Champlain.

Map No. 5. The Southern Colonies is by B. Romans and is extremely
rare, being often extracted. "This map will be found to have a very
particular Degree of Geographical and Topographical Merit." Phillips. 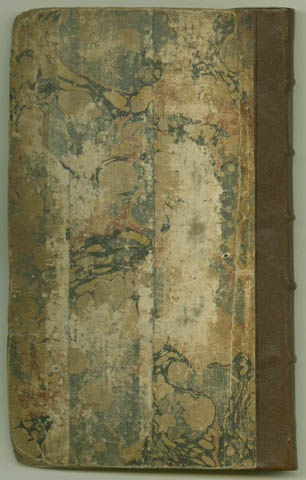