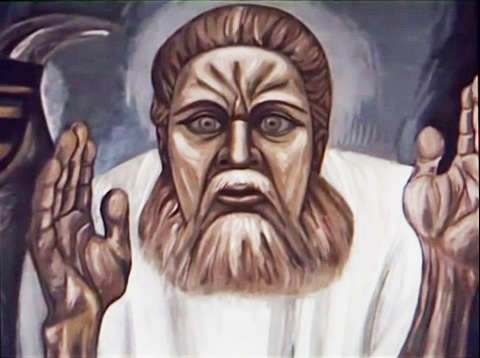 The Dartmouth College Library was awarded a grant from the National Film Preservation Foundation (NFPF) to preserve and make accessible "The Orozco Mural Quetzalcoatl." The film's purpose is to tell the myth of Quetzalcoatl as depicted in "The Epic of American Civilization" frescos painted by José Clemente Orozco in Baker Library. Using camera techniques such as pans, close-ups and long shots, and aided by Theodore Newman's dramatic score and a minimal narration, Canton makes the murals come alive.

At its release in 1962 the film received three citations for Specific Excellence from the Second Annual Boston International Film Festival. These citations were: outstanding use of the film medium for educational purposes; realization of inherent potential; and original musical score. The Theodore Newman score was conducted by former "Tonight Show" conductor Skitch Henderson.

The NFPF grant supported the creation of a new preservation master copy and DVD. The film premiered in Spring 2012 in conjunction with the Hood Museum of Art's special exhibit "Men of Fire: José Clemente Orozco and Jackson Pollock".

JOSEPH MARZANO: The Mexican painter Jose Clemente Orozco was born in 1883 and died in 1949. He is the leading member of the mural movement emerging from revolutionary Mexico in the 1920s. His major work in the United States covers 3,000 square feet of plaster wall in the Baker Library of Dartmouth College in Hanover, New Hampshire. On these walls, he tells his vision of America.

In the beginning men walked the earth. In strength and wonder, they went forth. Some stood. They were afraid. Others fell by the way.

In strength, and wonder, and fear, the first migration went forth in a vision. But men were alone on earth. And they were afraid.

So they created gods of fear and paid them homage.

Quetzalcoatl wakes men. Wakes men that they may go forth and build. To rise and open their eyes under the sun. To awake. To inquire. And that is the beginning.

Earth of promise, men of wonder. When Quetzalcoatl came to me, men, it was a golden age.

But Quetzalcoatl is betrayed by men. He leaves in anger on a raft of snakes. For men have fallen back in hate, in fear, and suspicion, and shame. Men are weak, and still alone.

The white god leaves a prophecy. To build again when men again are prepared to build.

Raft of snakes, there is none. Cortez will remain.

He brings new altars for the sacrifice.

And a new people. For some, the inquiry persists.

Their eyes are raised to the corn. And to the sun beyond the corn. For others, counterfeit corn.

But in the eye of the rebel, a challenge.

Man is still awake. The priests of learning watch over the birth of truth. Truth handed down generation to generation. Stillborn.

The world is in flames behind them, and they speak of truth. It is a dead truth. This truth will do no harm.

The tomb of the unknown soldier. His death is honored with a flag. The flag of all nations. The only difference is, the gods of death have adopted mass production.

This is a man among men. Behind him is all that men have learned. The false landmarks of their migrations.

Ahead is a promise to be fulfilled. Ahead is a world.