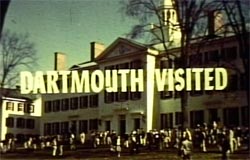 View "Baker Visited," the clip from the film specific to Baker Library

This color promotional 1950s’ film for potential applicants to Dartmouth College follows a fictional applicant, "Bert," through an admissions interview, classes, lectures, and student activities. This film shows the daily routines of a new student, including experiences in dormitories and fraternities. Most of Dartmouth’s students live in dormitories, and fraternity life is active at Dartmouth. Only juniors and seniors may live in the houses.

Baker Library is presented as the symbol of the school, and celebrated as one of the largest and best undergraduate libraries in the country. We see a full tour of Baker Library in this film: the main hall, nine levels of stacks, a number of quieter areas reserved in Baker, study rooms, the map section, and the periodical room. If students want to make the most of the library, they are urged to look into the many special collections, read in the Tower Room to keep in touch with contemporary writing, and scan the shelves in the stacks or the Treasure Room. Webster Hall is featured next, named for Daniel Webster, Dartmouth class of 1801, and it is where students would go to see productions of Dartmouth plays, outstanding lectures, and concerts. This film also features the Nugget theatre, and the Thayer Hall dining area.

The film promotes Dartmouth faculty as some of the country’s most able teachers with whom students work closely, and points out that most classes are small. A number of different departments and classes are visited (Economics, English, Mathematics, Russian, and Music; the Physics and Zoology labs; and the Great Issues lectures), as well as a visit to a professor’s home. The film also gives a full tour of Dartmouth’s three professional schools (Dartmouth Medical School; Thayer Engineering School; The Amos Tuck School of Business) and Dartmouth’s hospital (Dick’s House).  A clip of a Dartmouth Players performance and the Glee Club is included, as is The Church of Christ at Dartmouth College, as old as the college itself, created by Dartmouth's founder in 1769, before the American revolution.

There are also descriptions of the College newspaper, Student Radio Station, College Band, Outing Club, and ski hill. The annual Winter Carnival is featured, which brings some of the nation's best skiers for intercollegiate competition, and which is often a preview of men who will race on Olympics teams. Included are also scenes of Football Weekend in Hanover, a ROTC parade, President Eisenhower's commencement visit, a personal talk with President Dickey, and aerial views of the campus.