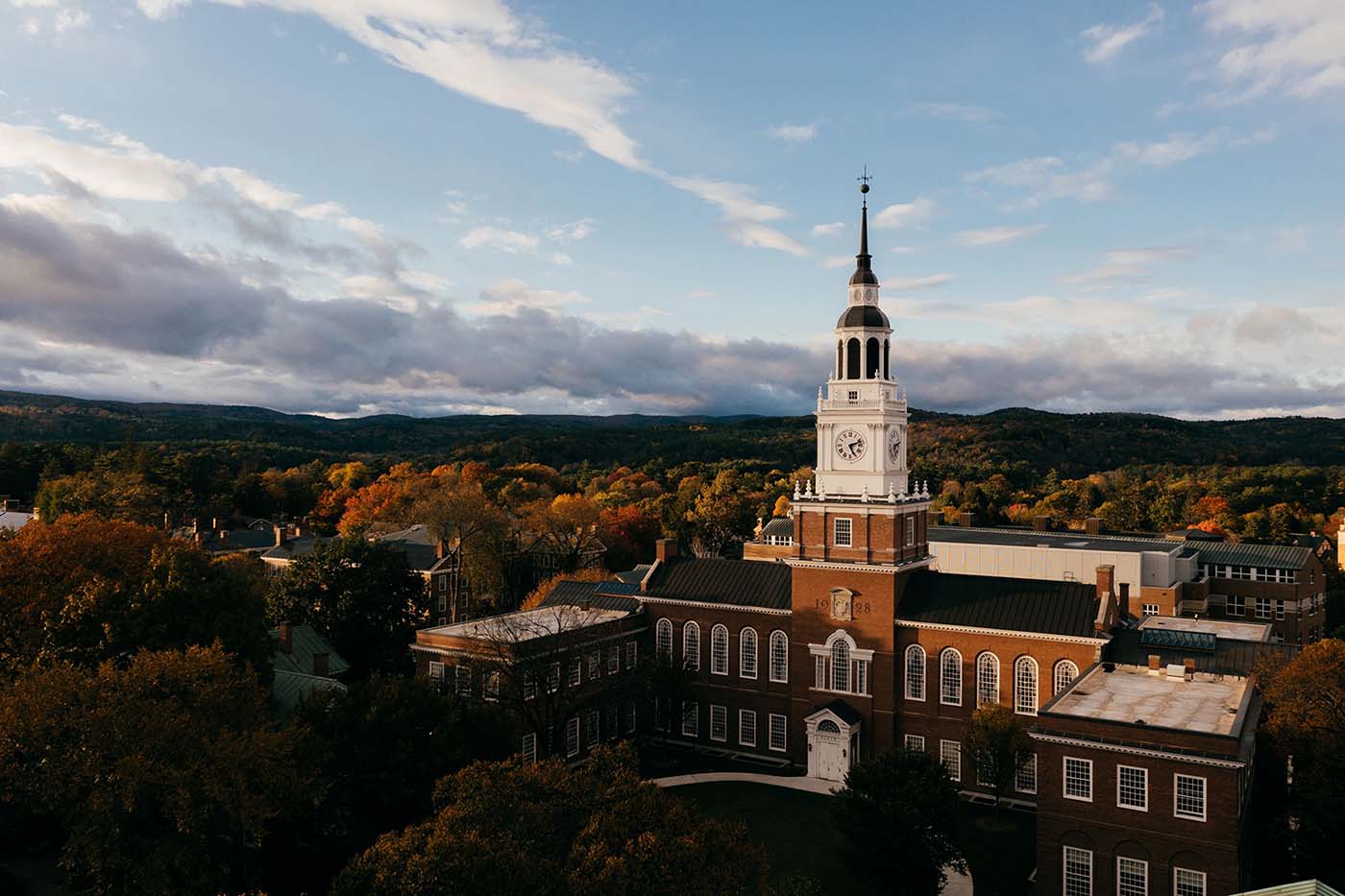 Baker Memorial Library opened in 1928. Library construction was funded by a gift to Dartmouth from George Fisher Baker; the building was named in honor of his uncle, Fisher Ames Baker, Dartmouth class of 1859. Edwin W. Sanborn also presented a major gift at that time for the endowment of continued library support. The library was designed by college architect Jens Frederick Larson, modeled after Independence Hall in Philadelphia, and located, as librarian Nathaniel L. Goodrich commented, “at the heart of the campus.” It brought together the entire library collection containing 240,000 volumes, with a capacity of 500,000 volumes. Just as importantly it offered Dartmouth students and faculty space for study, learning and interaction in areas such as the Class of 1913 Reference Room, the Tower reading rooms, the Class of 1902 Room, Hough’s Room (the Treasure Room), and the Reserve Corridor containing José Clemente Orozco’s mural “The Epic of American Civilization.”

Over the years Baker Library, as well as other campus libraries, grew along with the College. In 1941 a stack annex was added to house an additional 500,000 volumes in Baker. Further Baker expansions occurred in succeeding decades to accommodate collections and workspace. The library celebrated its one-millionth volume in 1968, and its two-millionth volume in 1994.

As the new millennium approached Dartmouth received the largest individual donation in its history from John W. Berry ’44 for the construction of a library for the 21st Century. Gifts from Mr. Berry, his son George Berry ‘66, the Loren M. Berry Foundation, and George F. Baker III combined to create the Berry Library and the expansion and renovation of Baker Library. The project was the work of two distinguished architectural firms, Venturi, Scott Brown & Associates, of Philadelphia, and Shepley Bullfinch Richardson and Abbot, of Boston.

The new complex, which opened in 2000 and saw completion in 2002, was named the Baker-Berry Library. Baker-Berry added individual and collaborative study space, included new staff office space, allowed for the collocation of public service areas, provided enhanced computing capabilities, a new media center, classrooms, a café, and increased the library’s collection capacity from one million to two million volumes. Academic Computing and Media Production were also located in the Berry Library adding to the continuum of resources available for teaching and learning.

This permanent exhibition space at the west end of Baker Library’s main hall opened in 1965. The room is named in honor of Harold Goddard Rugg, Class of 1906, who served on the library staff from his graduation until his retirement as associate librarian in 1953. It was presented as a gift to the College by Richard H. Mandel, Class of 1926.

The room contains portraits of presidents of the College; a reproduction of the College charter, granted in December 1769 by royal governor John Wentworth; a portrait of Mr. Rugg by Paul Sample, Class of 1920; and exhibit cases for changing displays of documents and photographs pertaining to various aspects of the history of the College.

This room on the Mezzanine Level of the West end of Baker Library contains facsimiles of the surviving books of the earliest library of Dartmouth. It is dedicated to Bezaleel Woodward, a tutor, treasurer, trustee, and vice-president of the College; he was also the first librarian and the first professor of mathematics and natural philosophy.

Charles Nelson Haskins, professor of mathematics and member of the Dartmouth faculty from 1909 until his death in 1942, made a gift to furnish and equip the room. As chairman of the Special Committee on the Planning of the New Building [Baker Library] he took a personal interest in creating the Woodward Room.